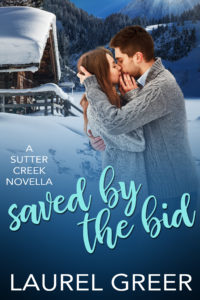 “By Saturday night, this place is going to look magical,” Mackenzie Fitzgerald vowed, gesturing at the alpine-rustic ballroom of the Sutter Mountain Hotel where the annual Search and Rescue bachelor auction was to be held. She had three days to take the decor from mountains-and-cowboys to glam, and she was down one very key set of hands. Stressed didn’t come close to her current state, not that she could let a hint of it show. “Lights. Glitz. Gold as far as the eye can see.”

“Do we have to dress in gold, too, or will my LBD do?” Her best friend, Lauren, eyed the space with thinly veiled doubt.

For having just climbed out of her car after a three-plus hour drive from Billings, Lauren looked as put together as always. She wore a crisp white blouse and navy linen suit that Mackenzie would have put wrinkles in by simply removing it from the hanger. Heck, it took Mackenzie an hour with a straightening iron to get her auburn curls into anything resembling Lauren’s sleek ponytail.

“Given I couldn’t be the one to go get Cadie, I had to do something,” Lauren said, twisting her bangle around her wrist. Grief etched lines onto her pale face. Much like it had on her brother’s before he’d hied off to Colorado to help their recently widowed sister move back home. Mackenzie’s chest still ached from seeing Andrew’s palpable anguish, and he’d been out of state for over a week.

“Well, I’d still totally understand if you want to focus on your sister. The fundraiser is the last thing your family should be worrying about, and I’m going to do my damnedest to make sure it goes off without a hitch. But if you can handle getting Cadie resettled and being my mistress of ceremonies, I’m happy to put you to work.” She cringed. Even using the word “happy” seemed wrong so soon after Lauren had lost her brother-in-law. “I mean…”

Her friend took a deep breath and smoothed the front of her skirt. “I can help both you and Cadie, whenever Andrew manages to get her here.”

Andrew, her boss as well as her friend, hadn’t known how long it would take him to pack up Cadie’s apartment. So to take the pressure off—God knew he’d come through for her over the years, hiring her onto the ski patrol for the Montana mountain his family owned and providing her with time off to further her Search and Rescue training—she’d offered to don the organizer-in-chief mantle. That he had accepted the help indicated how overextended he was at the moment. She couldn’t remember the last time he’d allowed someone else to be in charge—of anything—even if she had as much invested in raising enough money to replace their local SAR unit’s aging ATV fleet as he did.

Lauren clapped once. “Okay. Give me the low-down—do I get to be all-powerful, or what? Manage the bidding? Make sure no one obnoxious wins my brother?”

“Got it in one.” Mackenzie laughed. She motioned around the room to where the stage would be set up, as well as dinner tables. “And if you’re willing to help decorate tomorrow, we’re going to need to—”

Movement from the ballroom’s side door caught her eye.

Shit. The haggard looseness softening the usual strong angle of Andrew Dawson’s jaw stole her ability to finish her thought.

So that’s what a guy looked like after eight days of helping his sister pack up what remained of her life. Slumped shoulders and a wrinkled T-shirt and an expression promising he’d never quite be the same again,

The evidence of his emotional toll should have made him less attractive, but nope. Over a decade of trying not to notice his ever-loving hotness made Mackenzie an expert on the topic, and family tragedy didn’t diminish said hotness one iota.

She gave herself a shake. Ogling the guy while he was suffering was tacky as anything. He was her friend first, and the slight scuff of his sneakers on the generic carpeting rang as a reminder for how much support he could use right now.

“Drew,” Lauren said in a watery voice before closing the distance and gripping her brother tightly. “Didn’t expect you today.”

“Apartment was empty so there was no reason to stay.” His voice rasped worse than skis on a week-old ice sheet. “We were on the road by seven this morning. Cadie fell asleep. And given she pretty much hasn’t all week, I kept driving so she wouldn’t wake up.”

The corners of Mackenzie’s eyes stung, and she bit her lip to keep the tears from flowing. He needed her to be strong. To keep things running seamlessly with the fundraiser and with the mountain’s seasonal switchover so that he had space to support his sister—and to grieve himself.

“She at Dad’s?” Lauren asked, stepping out of her brother’s embrace.

Andrew gave a curt nod. “He’s trying to get some dinner into her.”

“Okay.” She pressed the heels of her hands to her eyes. “As long as you don’t need me until tomorrow, Kenz, I’m going to head to my dad’s.”

“Of course.” Mackenzie waved a hand. “Go be with your family.”

Lauren gave her a hug. “You’re family, too, hon. I’ll see you tomorrow.”

“Bright and early. We have confetti to strew.” Throat tight, Mackenzie ushered her friend out the door. She glanced at Andrew. Hands jammed in his pockets, he silently watched his sister leave. “Andrew?” she asked softly.

He finally made real eye contact. Strain deepened his blue gaze from summer-sky to royal.

Oh, Andrew. You need a hug just as much as Lauren did.

“I didn’t leave you in the lurch too badly?” he asked.

“Stop worrying about me,” she assured him. “We’re all good here. Hell, eligible men and sparkles? I’m actually having fun.”

A measure of relief relaxed some of the tension from his face and he managed a half-smile. “Eligible men and sparkles. You’re going to make us sound like a bad Twilight parody. Bids will hit an all-time low.”

She poked him in the bicep. “This auction’s going to be so successful we won’t need to hold one next year.”

He barked out a laugh. “Make that happen and I’ll be begging to marry you.”

Her mouth went dry. That never crossed her mind. She couldn’t let it.

During the winter he wasn’t her immediate boss—as the Director of Safety and Risk Management for the mountain, the ski patrol director was between them on the company hierarchy. But in a few weeks it would be Memorial Day, the summer season would start, and they’d lose that cushion. She’d once again be reporting directly to him as one of his climbing and rafting guides. Not to mention, Andrew had gotten out of a long-term relationship not that long ago. Either strike was big. Together, they necessitated burying any more-than-friends thoughts deeper than the old quarry they invariably had to rescue a drunk teenager from every summer.

She glanced at him with the careful, not-too-long, not-too-short way she’d perfected. “If you want me to take the auction on next year, too, I will.”

He blanched a little under his perpetual tan and ran a hand into his travel-mussed dark hair. “No. I’ve got it.”

“Drew.” Screw it. She really needed to hold him for a few seconds. She wrapped her arms around his waist. “Stop trying to run the world.”

“Just my corner of it.” His chin settled on top of her head and he sighed, clasping her to his chest.

Oh. Oh, shit, her cheek liked using his chest as a pillow way too much. She took as deep a breath as she could without being obvious. Even after a day spent driving in his pick-up, delicious wisps of leather and soap clung to his T-shirt.

He stiffened and backed away, scrubbing his palm along his mouth with a wince.

She hadn’t given herself away, had she? They hugged all the time. Platonically, of course. He’d been her across-the-street neighbor until college. She’d tagged along after him and her older brother from the time she could tie her shoes.

“I, uh—if you’re done here, we should go to the office before quitting time. I need to catch up on where you are with inventory and staffing,” he said, shoulders going as rigid as his back.

Her stomach twisted. “Drew, I—”

“Please, Kenz. I need some normalcy. Data columns and hairy schedules and boxes piled to the ceiling.”

“The boxes are unpacked.”

He blinked in disbelief.

“You told me to take care of things while you were gone. So I did.”

He nudged her with a shoulder. A really hard, powerful shoulder. “Owe you, Kenz.”

She swallowed, fighting the dryness in her throat. “Give me a raise and we’re even.”

“I wasn’t. We’ll tack ten extra hours onto your schedule for the summer and you can do some office management shit for me.” He closed his eyes and grimaced. “Getting Cadie back to normal is going to be a group effort. And if you feel like saving my ass with your organizational genius, I’m thinking it’s time to bury my pride.”

“Andrew!” Ain-drewh. As always, the Blanche Devereaux vowel emphasis buzzed around Mackenzie’s neck like a persistent Southern mosquito. Andrew’s ex, Kayla, swooped into the ballroom. “You’re home! I was so worried.”

Bafflement twisted Andrew’s mouth. “Since when?”

Mackenzie half-expected Kayla to put a hand to her chest à la having the vapors, but the spa manager just sidled in close to Andrew and traced her fingers along his jaw.

His eyes closed and his mouth flattened.

As did Mackenzie’s heart. That expression—it wasn’t heartbroken, but it wasn’t telegraphing ‘no way I’m getting back together with this woman,’ either.

“Time to go to the office, Drew?” Mackenzie prodded.

“Yeah, I—” His stomach growled audibly and he rubbed his belly.

Kayla took his free hand and tugged. “Come have dinner, honey. You can unload if you need to.”

“Please.” Kayla cut off his protest. “I need to apologize.”

Oh, come on. He wasn’t actually going to buy that, was he? Mackenzie poked his arm. “I thought we were going to check over the office.”

Kayla put a hand to her hip, posing as if she wore a floor-length gown rather than the hotel-spa-standard white blouse and khaki skirt. “He’s so tired he can barely stand, and you’re worried about work? Some friend you are.”

“I could use a meal,” he admitted.

“And some TLC,” Kayla added.

Andrew yawned and pinched the bridge of his nose. “Yeah, we’ll see.” He sent Mackenzie an apologetic smile. “I’m no use to you right now, anyway. I’ll see you in the office at eight tomorrow. Thursday staff meeting, as usual. Thanks for bailing me out this week.”

“Any time,” she said softly as he palmed Kayla’s lower back and walked out of the ballroom. Kayla shot a victorious look over her shoulder, and Mackenzie sighed.

For the first time in her life, she couldn’t lie to herself: she loved being Drew’s right-hand woman at work. But given the choice between appreciation and affection, she’d much rather have his love.

Saved By the Bid’s serial run is now complete! It will be published in full in early fall 2019. Stay tuned to my newsletter for updates!